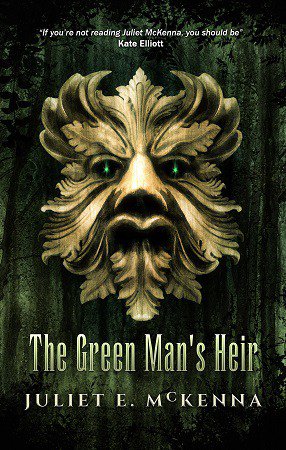 I have been a fan of Juliet McKenna’s works for a long time, and I was delighted when she offered me an e-ARC of her newest book as I had been anticipating it ever since she announced it was coming.

McKenna is best known for her secondary world fantasy series, beginning with The Thief’s Gamble, but she has written short stories set in our world too, including the precursor to this novel (‘The Roots of Aston Quercus’ in The Modern Fae’s Guide to Surviving Humanity). The Green Man’s Heir is a thoroughly engaging, at times almost impossible to put down, tale which, despite its titular character being a man, is peopled with an impressive array of interesting and intriguing women.

Daniel, the eponymous Heir, is the son of a dryad and a human man. He has a talent for woodcarving, a peaceable nature (except around murdering bastards), and peripatetic tendencies. He can see dryads, naiads, and all manner of other supernatural beings, including the Green Man himself.

One day, while looking for fallen wood to use for his carvings, he gets caught up in a police investigation in the local woods after a young woman is found murdered. He soon learns that there is a second dead young woman in the woods, thanks to Tila, the dryad whose home is in that particular wood. He learns that the murderer, a human man, is in thrall to a Wood Wose, and he finds himself pitted against the creature in a fight to the death.

The Wood Wose isn’t Daniel’s worst enemy, however. He learns from Kalei, the local naiad, that there are more dryads at nearby Blithehurst House. The dryads there are kin to Tila, who is murdered at the instigation of the Wose, so Daniel goes to see them, to pass on the news of her passing, and also to see if they can put him in touch with other sons of dryads.

Daniel also meets Eleanor Beauchene at Blithehurst. She runs the house as a tourist attraction on behalf of her family, and like Daniel, she can see dryads and other supernatural creatures. She can also hear things – supernatural creatures such as a wyrmling* that’s lurking underground in the undercroft within the mediaeval manor at Blithehurst. Daniel is forced by events into killing the wyrmling, then into trying to kill the full-grown wyrm that had been making trouble for him in her guise of a human woman, but not before it makes trouble for Eleanor as well.

Daniel is an interesting character – a thoughtful, intelligent man who’s very in tune with Nature thanks to his dryad heritage. He’s also capable, both as a carpenter and a wood-worker, and considerate – a nice example of non-toxic masculinity (something I very much welcome these days). But Daniel’s almost the only really well-fleshed out male character in this novel as McKenna has peopled her tale with a number of interesting female characters: four dryads, one naiad, one Wyrm (who takes on a female human form to cause trouble for Daniel), and one actual female human, Eleanor Beauchene. The latter somewhat reluctantly manages Blithehurst Hall: she’d like to go and do a doctorate in mediaeval history, having already done a degree in the subject, but the dryads won’t agree to it – since she’s the last of the family who can see them, and has ‘greenwood’ blood, they’d rather she settled down and started producing heirs to the estate to ensure that their trees and pastures are properly cared for (rather than, for example, being sold off/cut down for profit). Eventually, after the wyrmling’s been killed and the Wyrm itself has escaped, Daniel and Eleanor come to an arrangement, with the approval of the dryads – he’ll live and work on the estate, and Eleanor will mostly run things remotely while she takes a doctorate at Durham. They don’t immediately jump into bed together – but there’s a possibility they might get together at a later date.

All in all The Green Man’s Heir is a compelling, engaging tale that delves deep into British folklore while being bang up-to-date. I thoroughly enjoyed it, and am hoping that there’ll be a sequel.

View all posts by persiflage01